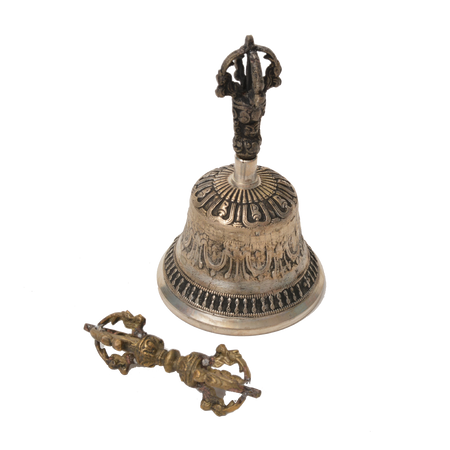 The Bell  and Vajra ( Dorge)

Vajras may have nine, five or three spokes. The spokes of a peaceful Vajra meet at the tip whereas those of a wrathful vajra are slightly splayed at the end. When paired with a bell their length can vary from four finger-widths to twenty-eight finger widths.

The upper sets of spokes of a five-spoked vajra symbolize the five wisdoms, which are:

A bell can be eight, twelve, sixteen, eighteen or twenty two finger-widths in height. Its base must be round, above which is a vase surmounted by the face of the goddess Prajnaparamita. Above these are a lotus, a moon disc and finally a vajra.

Paired with the vajra the bell represents wisdom, and as wisdom and method are an undivided unity so the vajra and bell are never parted or employed separately. These two devices must have things in Buddhist and tibetan ceremonies.