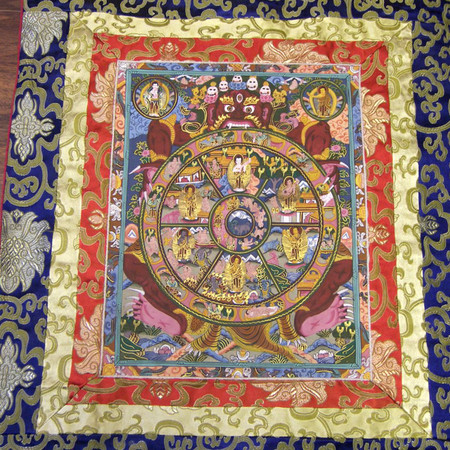 "Wheel of Life," this classical image from the Tibetan Buddhist tradition depicts the psychological states, or realms of existence, associated with the unenlightened state. It is hand painted by local artists called Lama on canvas and mounted in Tibetan Silk. A powerful mirror for spiritual aspirants, the wheel of deluded existence is often painted to the left of Tibetan monastery doors; it offers an opportunity for monks and pilgrims alike to look deeply into their essential being. At the center of the Mandala, the intertwined images of a pig, a rooster, and a snake symbolically depict the ignorance, greed, and aggression that characterize the worlds of suffering and dissatisfaction, which Buddhist call Samsara. Surrounding the central figures are five concentric rings of attendant deities or, in the case of these Thangkas, their symbolic equivalents. The first circle, the circle of Great Bliss, consists of four goddesses in the four cardinal directions. At the intermediate points of the compass are four skull cups supported by vases and containing seminal essences, blood, five ambrosial nectars, and the "five awakening." The second circle is the Circle of Mind (Chittachakra); the third is the Circle of Speech (Vakrachakra); the fourth, the Circle of the Body (Kayachakra); and the fifth, the Circle of Tantric Vows (Samayachakra). In the second two versions, these circles are represented by stylized lotus petals radiating from the central image. Each of the Mandalas is inscribed by a decorative frieze of mythical animals and floral motifs, an element introduced into Buddhist painting in the mid – twentieth century by Newar artists of the Kathmandu valley. As a support for inner transformation, Chakrasamvara's blissful radiance converts timid responses to reality into radical engagement. When desire no longer clings to its object, it awakens to its primordial nature, which no longer divides into self and other. This blissful awareness encompasses all life and emotions, combusting in the liberating vision of selfless ecstasy. On the outer ring of the first Mandala are the eight charnel grounds that confront Tantric practitioners with a realm beyond hopes, desires, preferences, and fears. The charnel grounds signify the transformative energies of Tantra itself, the seamless continuity of life and death. Ignorance of our true nature is transformed in the charnel grounds into fearless and radiant awareness, the corpse of our mundane self consumed by jackals and flames. Without an acceptance of death and transfiguration, our aspirations to wholeness, to Buddhahood, can never bear fruit. All Creation Begins with the sacred union of male and female energies. To experience the pure creative passion between man and woman, to know unconditional love, is to manifest the body, mind, and spirit of a Buddha.