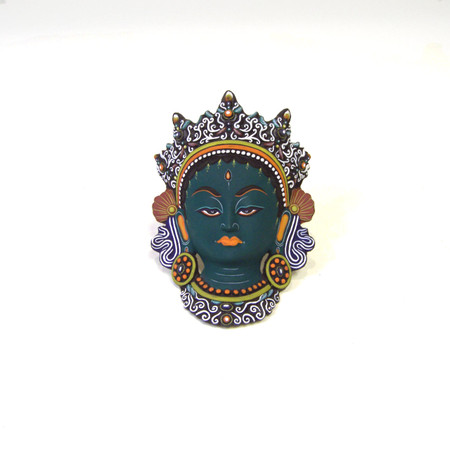 Our hand painted Green Tara Papier Mache mask has a rope for hanging the mask on the wall.

A small town called Thimi in Kathmandu,Nepal is very popular for Papier mache masks, these masks are made by a traditional artists called Pun (Chitrakar). Chitrakar simply means painter in Nepali language. From tiny to gigantic masks, which are embodiment of the gods, demons and animals, are made in Thimi. In masked dance, when the dancer wears mask, he falls into a trance. Mask is source and strength in masked dance. Beside dance, masks are also decorated in house and temples.

Black clay, cotton, Nepali lokta paper, white cloth and color are needed to make traditional mask. Clay and cotton are mixed by beating with wooden hammer. It is then casted in mould made of Plaster of Paris. It is then dried . Nepali lokta paper is glued in both faces. Then only it is colored.

Green Tara (Tibetan language Pagma Drolma), is one of the principal forms of Arya Tara. In Nepal, the practice of Green Tara helps to overcome fear and anxiety of all kinds and bring happiness.  The practice of Green Tara helps to overcome eight fears they are: Lions and pride, delusions and wild elephants, hatred and forest fires, snakes and envy, robbers and fanatical views, prisons and avarice, demons and doubt. This statue is made in Nepal of copper and bronze and is fully gold plated except for her face.

Tara in Tibetan Buddhism is known as the "mother of liberation", and represents the virtues of success in work and achievements. In Japan she is known as Tara Bosatsu.

Tara is a tantric meditation deity whose practice is used by practitioners of the Tibetan Buddhism to develop certain inner qualities and understand outer,  inner and secret teachings about compassion and emptiness. Tara is actually the generic name for a set of female Buddhas of similar aspect. These may more properly be understood as different aspects of the same quality, as bodhisattvas are often considered metaphors for Buddhist virtues.