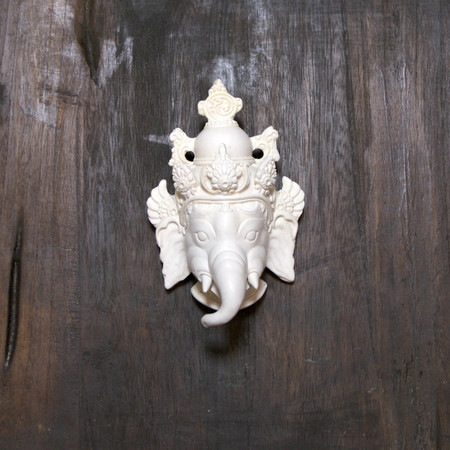 Our beautiful white Lord Ganesh Resin mask is perfect for hanging on the wall and comes with a hook for hanging.

Ganesha is also sometimes known as Ganapati in India.  He is one of the most-worshipped gods in Hinduism and is worshipped before undertaking any journey or before beginning any ritual. The son of Shiva and Parvati, Ganesha has an elephantine countenance with a curved trunk and big ears, and a huge pot-bellied body of a human being. He is the Lord of success and destroyer of evils and obstacles. He is also worshipped as the god of education, knowledge, wisdom and wealth. In fact, Ganesha is one of the five prime Hindu deities (Brahma, Vishnu, Shiva and Durga being the other four) whose idolatry is glorified as thepanchayatana puja. Sri Ganesha, is the deity to which Hindus pray to before starting any new task. He is the Lord who removes all obstacles on the path of the spiritual aspirant, and bestows upon him worldly as well as spiritual success. He is the Lord of harmony and peace.

Ganesha's head symbolizes the Atman or the soul, which is the ultimate supreme reality of human existence, and his human body signifies Maya or the earthly existence of human beings. The elephant head denotes wisdom and its trunk represents OM, the sound symbol of cosmic reality.  There are several stories about how Ganesha got his head.  In one story the goddess Parvati, while bathing, created a boy out of the dirt of her body and assigned him the task of guarding the entrance to her bathroom. When Shiva, her husband returned, he was surprised to find a stranger denying him access, and struck off the boy's head in rage. Parvati broke down in utter grief and to soothe her, Shiva sent out his squad (gana) to fetch the head of any sleeping being who was facing the north. The company found a sleeping elephant and brought back its severed head, which was then attached to the body of the boy. Shiva restored its life and made him the leader (pati) of his troops. Hence his name 'Ganapati'. Shiva also bestowed a boon that people would worship him and invoke his name before undertaking any venture.